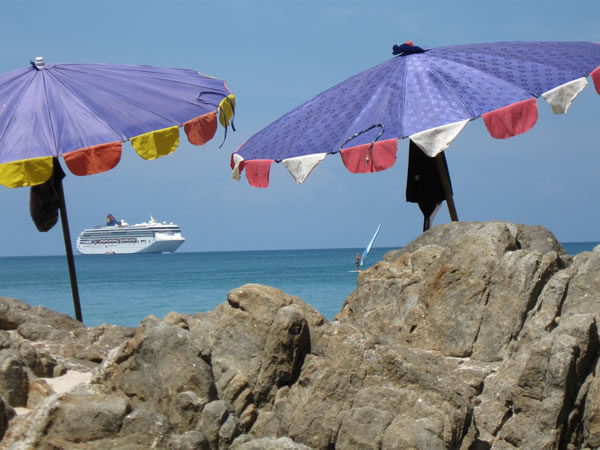 Phuket is well-known as an international resort destination. The scenic beauties of Phuket with its dazzling white sand beaches, crystal clear turquoise water, and limestone cliffs in fantastic shapes rising from the sea are tourist magnets; the term tropical paradise is justified.

Once you have seen the island’s beaches, you can understand the intense migration and the corresponding building boom. Phuket is Thailand’s largest island about the size of Singapore, with population around 70,000. It is connected to the mainland to the north by the Sarasin Bridge.

The Pleasures of Phuket: Phuket town grew along with the development of tin production in 19th century. The most interesting architecture is concentrated in the northeast section, where the early 20th century tin barons built their mansions along the lines of European manors. Toward the center of town, several buildings retain the architectural blend of styles known as Sino-Portuguese: the Chartered Bank, Thai office, and the Provincial Town Hall, which was used in the movie ‘The Killing Fields’. A drive up Khao Rang will give you the best view of the town and its surrounding. Phuket’s countless restaurants specialize in generous amount of fresh seafood and Malay-style meal that reflects Chinese and Indian influence in its bold flavors with the use of curry powder and turmeric. The Phuket shopping center is a modern, theme-park like recreation of the Sino-Portuguese style, full of souvenir shops. The shopping areas are located on Ratsada Rd, Montri Rd, Yaowarat Rd, Phang-nga Rd, Thalang Rd, Thepkasattri Rd, and in Patong, Kata, and Karon Beaches. The most attractions are still centered around its renowned beaches: Diving, snorkeling, sailing, water-skiing, sea-kayaking, deep-sea fishing, and romantic cruises on chartered boat. Phuket’s glory lies in its beaches and it has a wealth of them.

Phuket Beaches: There are thirteen major beaches and they ranges from strands of several miles long to smaller crescents. Most of all of Phuket’s best beaches are located on the western side of the island, each with a distinctive character of its own. A narrow road connects the strings of beaches and cuts down travel time along the coast considerably.

Phuket is the biggest draw of southern Thailand. A boom in real estate has spurred developers to build countless of shop houses, hotels and condominiums among many of the elegant old millionaires’ mansions and along the gorgeous beaches. Go with the tourist flow or go off on your own and explore this beautiful island; it is big enough for everybody. In fact, Phuket is Thailand’s largest and is one of the most populated islands; but the island’s modern tourist frenzy is only the latest development in an eventful history that goes back hundreds of years.

Diving Around Phuket
A Day in Hua Hin Spa